Adventurekateers – Our first foray into monthly comics was a… 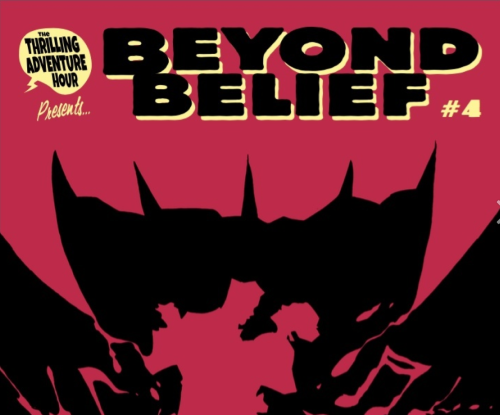 Our
first foray into monthly comics was a whirlwind. It was exciting and
it was a learning experience. It was several learning experiences. We
thought it would take four months for four issues of each comic, but
as you know, It took longer. As we’ve discussed elsewhere, there were significant health issues from one of the creative team. This led to long delays. The good news is that that person is recovering well. The bad news is that, due to this delay, Image is opting not to release issue #4 of Beyond Belief in physical form.

In
the interest of getting that issue into the hands of those who want
it, we are offering a digital version at the potentially hefty price
tag of “pay what you want.” Get issue #4 of Beyond Belief here.

The art and
cover are by Phil Hester. Please check out his back
and current catalog. He is one of the truly greats. We had inks by
Eric Gapstur with some assists by Ande Parks. Mauricio Wallace did
the colors. Marshall Dillon and Taylor Esposito did the letters.
Chris Eliopoulos designed the logo. Nate Cosby
edited the book. Thanks to the WorkJuice players for their constant
inspiration and to you for supporting this silly endeavor.

Thanks
for sticking with us. This is not the end. It is never the end. You
know that. We stopped doing the monthly stage show and at the time of
this writing, we embarking upon our tenth and eleventh shows since
our finale. As with the shows, we will find more ways to comics. We are currently in negotiations to release collected versions of both the Sparks Nevada and Beyond Belief books, and we’ll update you as soon as there’s any news on that front. We
hope you enjoyed this run and we look forward to bringing you what’s
next.

Thanks
again and always!